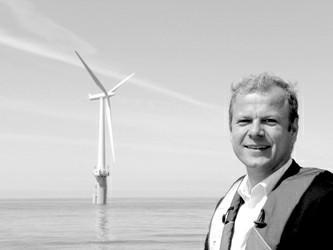 In recent years, wind power has become a hot issue. Due to the cleanliness and sustainability of wind energy, the use of wind power has been increasingly favored by more and more countries. Recently, two young Americans have invented a wind turbine suspended in the air. Its shape resembles that of an airship. It can convert more power than conventional wind turbines while saving more economic costs.

Low-cost wind turbines invented by Ben Glass and Adam Ryan, like a large airship suspended in midair. The outer structure of the hollow airship is composed of a solid fabric and the interior is filled with helium. The middle of the airship is a traditional three-leaf wind turbine. Its working principle is very simple. When the wind passes through the hollow structure, the turbine will rotate to generate electricity. Although in appearance, it is slightly smaller than ordinary wind turbine generators, but this type of suspension generator generates 4 times more power than ordinary wind turbines.

Currently, the company that Glass and Ryan co-founded has already cooperated with the energy agency of Alaska in the United States and intends to bring the first suspended-type wind turbine to the sky later this year.