ã€Global Internet Reporter Zhang Zhiyingã€‘ Although Samsung Li is currently absent from the leadership position, Samsung Electronics has reported good news that it has successfully acquired Harman, the world's largest electronic equipment manufacturer. At the same time, it is also a well-known US auto parts department. supplier. 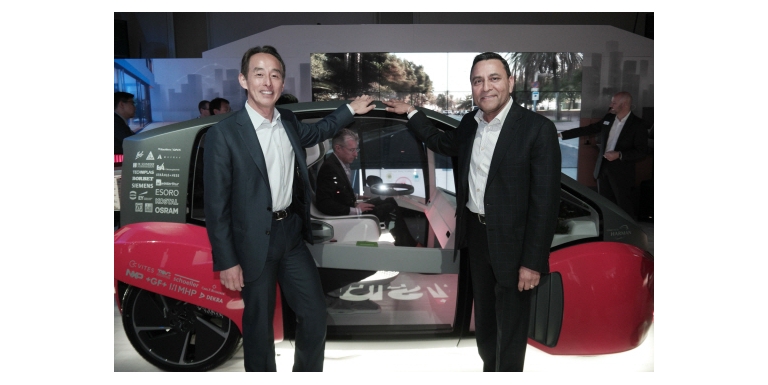 Caption: On the right is Harman CEO Dinesh Paliwal, and on the left is Sun Yingquan, president and president of Samsung's Device Solutions Division.

On February 17, US time, at the meeting in Stanford, Harmanâ€™s shareholders agreed to the merger with Samsung Electronics. Samsung Electronics plans to accept the consent of the local government and accelerate the transaction before the third quarter of 2017.

Earlier, some Harman shareholders initiated a class action lawsuit. The complaint did not seek a better sale price. This is also why some market experts expect this merger to meet many challenges. At the same time, it is more worried that Li Zaiyuâ€™s case of being arrested for bribery will affect the results of the merger, but it does not seem to have any effect now. Therefore, after Samsung Electronics led the crisis brought about by the vacuum, it is still finally relieved.

According to the SEC agency's supervisory document for Harman, 79.5 million common stocks in 70.8% or 69.9 million shares were voted in. The final result shows that 47 million shares support trading and 2.1 million shares oppose. Under the current law, when most shareholders vote in favor, the shareholders who oppose the merger need to sell their shares. Samsung will pay $8 billion to Harman, which will be the largest overseas merger and acquisition transaction in Korea's history.

This merger still needs to wait for the final approval of the antitrust authorities of the United States, Europe, China, and South Korea. In Europe and China, some specific antitrust restrictions will be required by government agencies to exchange the right to agree on transactions because both countries are the main markets for Harman products. The anti-monopoly law is applied when there is a monopoly, or when the acquisition of monopoly power between a company and a specific business and product occurs through mergers and acquisitions; Samsung Electronics is a new starter in the automotive electronics field. Even if it is merged with Harman, it is now predicted. It will be too early for Samsung to dominate the market. Harman will be Samsung's subsidiary after the merger, and the management will remain unchanged.

The acquisition of Harman by Samsung Electronics exacerbated Japanâ€™s concern about the backwardness of its domestic auto and auto parts makers in the automotive technology competition. When asked about Samsungâ€™s aforementioned transaction, Japanâ€™s Minister of Economy, Industry and Trade, Shigeno Hiroshi, said that this is a very fast-changing industry. Multiple coalitions are forming in various industries and Japan needs to develop a clear strategy to develop automotive technology.

Before the media commented that Japan's previous response to the technical changes to change the industry landscape has been poor. For example, the countryâ€™s mobile phone manufacturing company was once the industry leader, but Appleâ€™s iPhone gave a fatal blow to Japanese mobile phone makers who were slow to take a step in the smart phone business and eventually struggled. Although Japanâ€™s chip makers are still strong in some areas, it is difficult to reproduce the situation that ruled the world 25 years ago.

The CSP series Programmable DC Power Supply is upgraded and developed on the basis of iDealTek-Electronics' mature IGBT high frequency switching power topology and all-digital signal control loop. Featured with high precision, low ripple and fast response speed.
The Programmable DC Power Supply is different from the traditional DC power supply that can only control the output voltage and current values. The programmable DC Power Supplies can realize the programming of multiple parameters through adding the microprocessor unit with built-in control program, such as parameters like operating time, output rise time, protection response time, OVP and OCP etc. All can be set and programmed.
At the same time, the microprocessor unit also adds more functions to the power monitoring system, which can realize the query of the historical data of the test results, making the programmable DC power supply the best choice for laboratory test, production line manufacturing test, photovoltaic plate aging test and various cutting-edge applications with Programmable DC power supplies.

At the same time, the whole series of programmable DC power supplies are equipped with RS485 interface as standard, following the MODBUS-RTU international protocol, which can realize remote control programming, test results save and uploading to the master unit and status monitoring of the power supply.