In the maneuvering condition of the drone and the motion platform, in order to meet the tracking requirements of the relative pose measurement system, it is necessary to realize the real-time stable tracking of the target drone under the maneuver state by the relative pose measurement system on the motion platform. In the tracking process of the target drone, if the matching calculation is directly performed on all the contents in the scene to find the best matching position, a large amount of redundant information needs to be processed. Therefore, in order to narrow the target search range, a certain search algorithm is needed to make a pre-estimation hypothesis on the position state of the future time target. At present, the more commonly used methods include prediction method, optimized search direction, frame-by-frame detection method and frame-by-frame segmentation method. For the landing process of drones, the environmental interference is large, the motion is more complicated, and the prediction method is selected to narrow the target search range. The prediction method can predict the possible position of the next frame of the moving body and find the best advantage in its relevant area.
According to the analysis of the tracking characteristics of the target UAV during the landing process of the target attitude measurement system, it can be known that:
(1) The observed UAVs may have multiple perspectives, and the appearances between the various perspectives are significantly different. In addition, due to meteorological factors, the background changes are more complicated;
(2) The auxiliary information provided by the UAV system itself can be utilized, mainly including the position information provided by the measurement and control link as auxiliary tracking;
(3) The tracking target is a collaborative model, that is, its various perspective models are known, and training can be performed offline.
Based on the above characteristics, a multi-view cooperative model tracking technology based on multi-information fusion is proposed. The target information of the UAV provided by the motion platform navigation device is combined with the Kalman filter algorithm under the Bayesian framework. The algorithm principle is shown in Figure 3. First, make full use of the collaboration model for offline learning and build a multi-view model library. When the initial position of the target is detected, its current perspective is estimated and matched with the corresponding perspective model in the model library, and the next frame position is predicted by Kalman filtering. At the same time, the target UAV motion information provided by the relative pose measurement system is merged with the above-mentioned visual algorithm prediction information to obtain the final predicted position of the next frame target. The target matching diagram is shown in Figure 4. 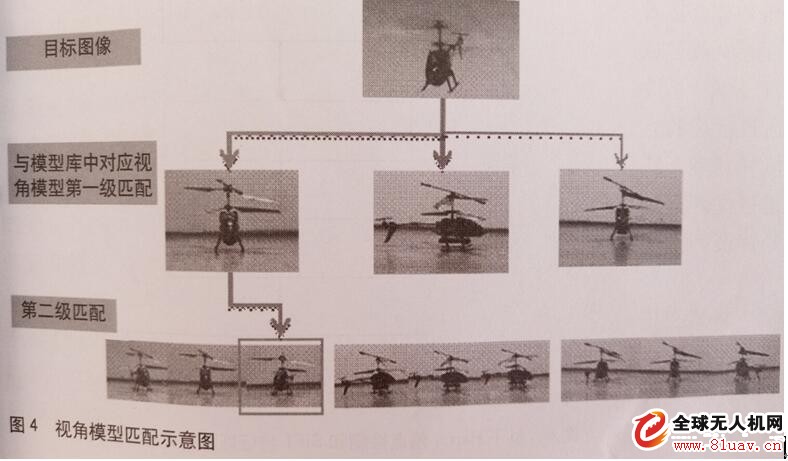