The circuit shown in Figure 1 is a complete loop-powered thermocouple temperature measurement system that uses a PWM function of a precision analog microcontroller to control the 4 mA to 20 mA output current. 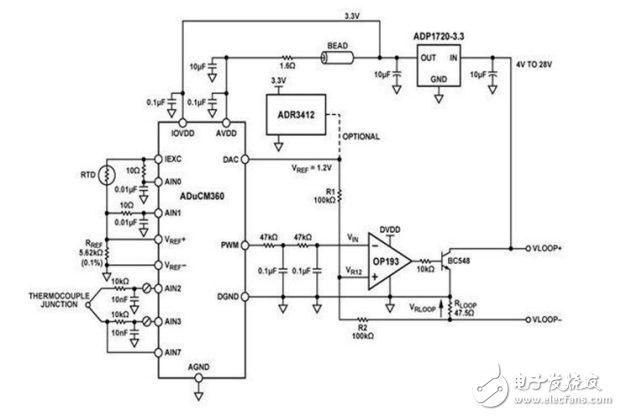 Circuit Theory: This circuit integrates most of the circuit functions into the precision analog microcontroller ADuCM360, including dual 24-bit Î£-Î” ADCs, ARM Cortex TM-M3 processor cores, and control loop voltages up to 28 The PWM/DAC feature of V's 4 mA to 20 mA loop provides a low-cost temperature monitoring solution. Among them, ADuCM360 is connected to a T-type thermocouple and a 100Î© platinum resistance temperature detector (RTD). RTD is used for cold junction compensation. The low-power Cortex-M3 core converts ADC readings to temperature values. Supported T-type thermocouples have a temperature range of âˆ’200Â° C to +350Â° C and this temperature range is 4mA to 20mA. This circuit has the advantage of driving a 4mA to 20mA loop with higher resolution PWM. The PWM-based output provides 14-bit resolution. The circuit is powered by the linear regulator ADP1720, which regulates the loop supply to 3.3 V, powering the ADuCM360, the op amp OP193, and the optional reference ADR3412.

As we all known a common health risk that miners face is thermal â€“ or heat â€“ stress. Mining environments are often very hot and humid, overexposure to heat and humidity can cause the body to become fatigued and distressed.

Win 3 Portable Heat Stress Monitor is designed to quickly and accurately evaluate potential heat stress environments. It can be attached on the cap lamp cable or put in the pocket or even hang it some where. Thanks to its continuous temperature&relative humidity measuring, it will real time help workers to remove themselves from the overexposure enviroment.