Hyundai's instrument panel assembly is generally divided into two parts, one for the dashboard and the instrument panel and the platform in front of the steering wheel, and the other for the sub-dash on the driver's side channel. The instrument panel is the main body of the installation indicator. It collects the monitoring instruments of the whole vehicle. It reveals the engine speed, oil pressure, water temperature and fuel reserves, the working status of the lights and generators, the current speed and mileage of the vehicle, etc. . Some dashboards also display information such as shift gears, clocks, ambient temperature inside and outside the vehicle, road tilt and ground height. Most modern cars are equipped with control components for air conditioners, audio equipment, etc. on the sub-dashboard, which makes the overall layout compact and reasonable, and also facilitates the driver's operation [23]. With the development of the modern automobile industry and electronic technology, various systems and institutions in automobiles have become increasingly complex, and the amount of information on the driving of automobiles and various working conditions has increased remarkably. At the same time, in order to improve the environmental protection, safety, economy and intelligence of automobiles, car drivers need more and more rapid understanding of various information about car operation, which makes car electronic instruments develop to information display centers. An important part of the driver information system. The replacement of traditional mechanical or electromechanical analog instruments by automotive electronic meters has become a trend of development.

The use of electronic display technology, that is, the thin flat electronic display technology, the car's flat panel displays the numbers and information. It is very clear. It replaces the analog display speed and engine tachometer used in the past, so that the driver can drive. At the same time, changes in meter numbers and other information can still be clearly seen. It has the advantages of fast test response, accurate indication, flexible graphic design, clear digital, good visual performance, high degree of integration, high reliability and low power consumption.

Since there are no moving parts, the reaction is fast, the reliability is good, the arrangement is flexible and compact, and the best display form is available. Generally, in addition to requiring the automobile instrument to be durable, vibration-proof, accurate in indication, convenient in reading, and less affected by temperature and humidity, it is also required to be light, comfortable, beautiful and have good interchangeability. Automotive electronic meters meet these requirements.

When the power switch is turned on, the current consists of the battery positive â†’ pole ignition switch â†’ coil L1 â†’ two ways (one through the thermistor; the other through the coil L2) â†’ grounding â†’ battery negative pole to form a loop.

2) Working principle When the fuel tank has no oil, the float sinks, the sliding piece on the sliding wire resistance moves to the rightmost end, and the right coil is short-circuited. The current is from the positive battery â†’ ignition switch â†’ terminal (top) â†’ left coil â†’ terminal (Bottom) â†’ float slider â†’ slider â†’ grounding â†’ battery negative. The magnetic field generated by the left coil causes the rotor to move the pointer to the left, so that the pointer is at the "E" position.

When the fuel tank is filled with oil, the float is moved to the leftmost end of the resistor with the slider, and the resistors are all connected to the circuit. At this time, the current in the left coil is smaller, the magnetic field is weaker, and the current in the right coil is increased, the magnetic field is strengthened, and the rotor is moved to the right with the pointer, so that the pointer is at the "F" (full) position.

1) The structure of the electronic fuel gauge is shown in Figure 3-5. 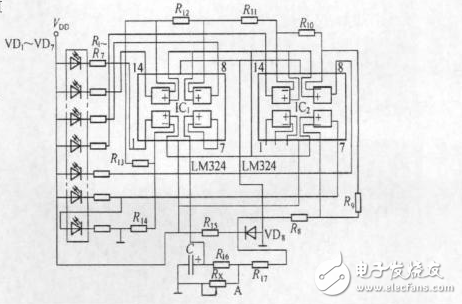 2) Working principle
When the fuel in the fuel tank is full, the Rx resistance is the smallest, the A point potential is the lowest, the ICI and ICZ voltage comparator outputs are low, the 6 green LEDs are all lit, and the red LED VDI is extinguished, indicating the fuel tank. Full.

The structural speedometer consists of a permanent magnet, an aluminum bowl with a shaft and a pointer, a cover, and a dial. The odometer consists of three pairs of worm gears, intermediate gears, and a range counter. The drive shaft of the watch is driven by the transmission output shaft through the gear meshing and the flexible shaft.

The drive shaft and the worm gear mechanism have a certain transmission ratio. When the car is running, the flexible shaft drives the drive shaft, and after three pairs of worm gears, the first digital wheel on the right side of the odometer is driven and passed from right to left to the rest. The digital wheel accumulates the mileage. At the same time, the gear on the odometer drives the short-range digital wheel through the intermediate gear, and passes it to the left to the remaining digital wheels to record the short-distance mileage. When you need to clear the short mileage record, press the short odometer reset lever to return the indication of the short mileage counter to zero.

The engine tachometer is used to display the engine speed. Commonly used is the electronic tachometer. As shown in Figure 3.

An integration circuit consisting of R1, R2, and C1 (functioning to shape the open/close pulse signal), charge and discharge capacitor C, amplifier tube T, and voltage regulator DZ (to stabilize the charging voltage of capacitor C, improve the measurement accuracy of the tachometer) and Tachometer n and so on. The speed signal is taken from the pulse signal of the primary circuit of the ignition system. D3 acts as a protection against the transient high voltage breakdown of the T collector.

When the engine works to close the breaker contact K, the base strap of the triode T is unbiased in the off state, and the positive pole of the power supply â†’ R3 â†’ C â†’ D2 â†’ grounding â†’ the negative pole of the power supply. Capacitor C is charged; when the contact is open, the base potential of the triode T is close to the power supply voltage, and T is turned from off to on. At this time, the charge on the capacitor C is full â†’ T â†’ tachometer n â†’ diode D1 â†’ C The discharge circuit drives the tachometer. The contacts are repeatedly opened and closed, and the capacitor C is continuously charged and discharged, so that the tachometer n displays the average value of the passing current. The opening and closing frequency of the breaker contact is proportional to the engine speed, and the average value of the discharge current through the tachometer n is also proportional to the engine speed.

Â· Reverse Backup Car Dash Security Sensor Camera For Trucks RV , Will Offer Much Safety Drive With It ,Extra Eyes on Trucks Behind and Side.